In the year 2002 cutting a block of Paesina Stone, we noted a strange imprint that excited our attention.

Doctor E. Cioppi, paleontologist of the Museum of Natural History of the University of Florence, asked by us, identified in the sample a rare trace of Zoophycos on the Paesina Stone and wanted that our sample would be exhibited in the exposition "Hidden Treasures" organized by the Natural History Museum of the University of Florence which was held care of the Pazzi - Ammannati Palace, Borgo Albizi, 28 Florence, in the period between the 19th of October 2002 and the 28th of February 2003. 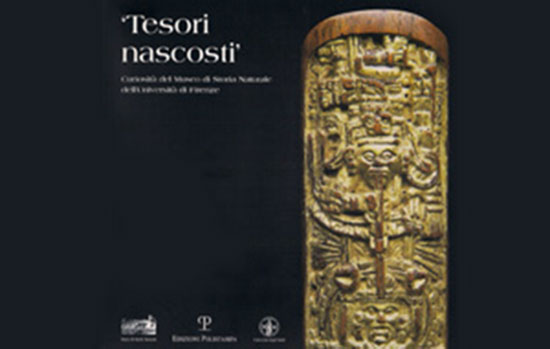 The caption that accompanied the sample was the following:

Zoophycos on Paesina Stone – Together with the Ichnofacies of the Verrucano-problems is exhibited a truly rare and unusual sample: a trace of Zoophycos found in the Paesina Stone in a longitudinal section. The trace has a spiral trend growing towards the base and could represent a superimposition of galleries and tunnels to a U for the nutrition of "Detritivores" animals, generally moving little, like worms. The sample, lent to us by its discoverers Pierluigi and Lorenzo Gallerini, comes from the area of S. Brigida (Florence) where some levels of this characteristic calcareous (limestone) rock appear. 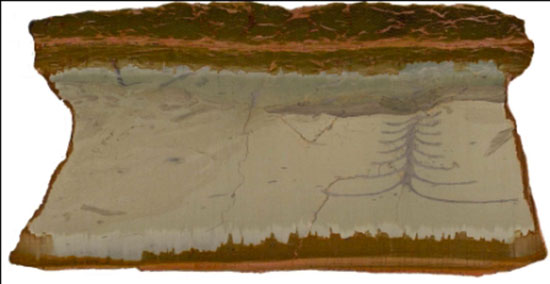 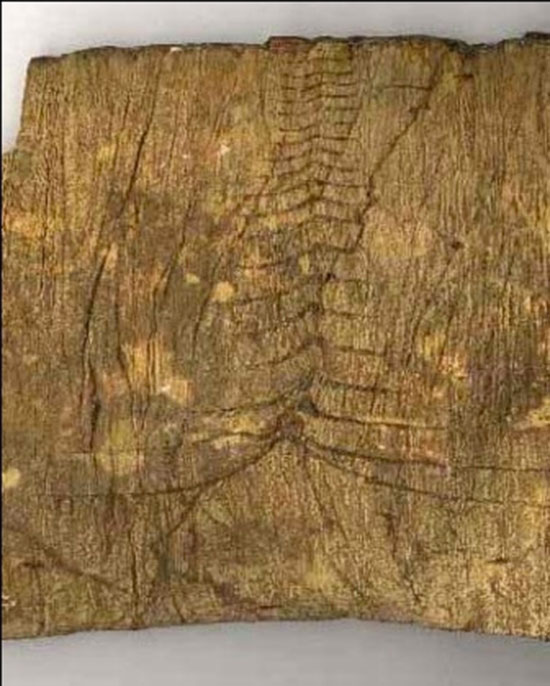 At the end of the exposition we gave the sample to the Museum of Paleontology of the University of Studies of Florence where it is currently exhibited. Regarding this subject we refer to wat is displayed in the text: S. Raffi – E. Serpagli – Introduction to Paleontology - UTET – Turin - Italy

Trace fossils contribute a formidable and most important documentation of the existence of organisms that, for the lack of hard parts or for "Taphonomich" causes, they are not fossilized. Many of these animals belong to groups of organisms with soft bodies that are collectively called "Worms" among these we refer to the "Nemertineans", the "Nematodes", the "Sipunculides", the "Annelides", the "Priapulides", the "Horseshoe worms", the "Pogonophora", and the "Enteropneusa".( Page 402)

The fossil form in all relief (complete relief) are complete three dimensional structures with well defined edges conserved in the internal part of the sediment. They are generally produced by the activity of invertebrates (Detritivores) in search of nutriment. These organisms ingest enormous quantities of sediment keeping the nutrition substances and eliminating the rest as excrement. So they form galleries or tunnels that are often full of little faecal balls.( Page 370)

The Ichnofacies Zoophycos is indicative of muddy water or muddy sandy in the environment of transition between the coastal zone and the bathyal, but can also be present in the abyssal zone. The diversity in the forms present is not very elevated and at times these Ichnofacies are represented only by Zoophycos. The association is made up almost exclusively by Fodinichnia (Zoophycos, Chondrites, Lorenzinia) while Pascichnia and Repichnia are rather rare.( Page 408) 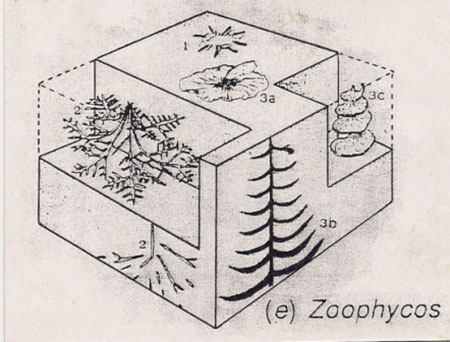 Zoophycos - The helix-spiral trace growing towards the base that irradiates from a central axis and the surface is covered by concentric streaks. The diameter of the structure can reach 60 cm. or more. Different hypotheses have been proposed to explain the origin of this trace fossil and the most recent interprets it as a hole composite made up of a series of holes layered in a U, seems the most plausible.(Page 381)